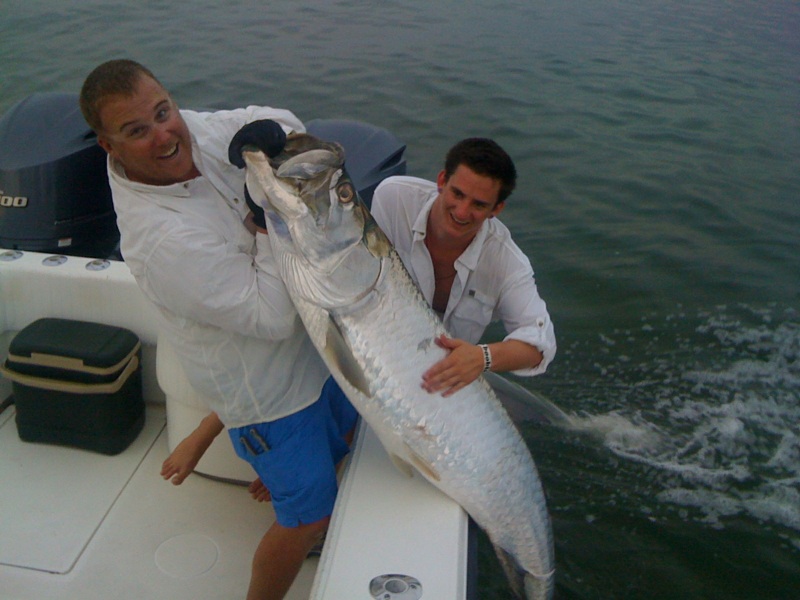 If you have ever had the privilege of hooking up on a big tarpon then you know the exhilaration and thrill of testing yourself in battle against one of the most sought after gamefish in the world. This distinction is easy to see at first glance as the tarpon starts a series of spectacular acrobatic leaps in the air that will have your heart pounding, your rod bending and your drag screaming. You better hold on!

Since the tarpon’s habitat is so close to the shoreline, fishermen of all types and skill levels can catch them. They can be caught from jetties, passes, docks, bridges, beaches, piers and rivers. Tarpon can be caught while using many types of tackle, rods, baits, lures and rigs either while fishing from a boat, canoe, kayak or walking and wading from the shoreline as the tarpon work up and down the beaches.

Live bait fishermen’s bait of choice is the ‘dollar crab’. A small live blue crab about two inches across its carapace, hooked through one end of it’s shell or underneath through a swimmer leg. Other extremely effective live baits include pinfish, threadfin herrings and pilchards. On days when the tarpon is being finicky in it’s tablefare selection, try these for the best results, and oh, by the way, don’t forget about a live mullet. If you can get them, use them. Flyfishermen are not left out either. The stealth of casting the right fly can sometimes be the trick to hooking up.

But Just What is a Tarpon?

This exceptionally fine creature is a prehistoric animal and the only fish with an air bladder. This allows it to absorb oxygen and live in waters with very low oxygen content. You can see them gulp air at the water surface. Tarpon are also called poons, tarpum, sabalo real, cuffum, silverfish or silver king and belong to the bony fish family Elopidae. The Latin designation is Megalops atlanticus.

While only microscopic at birth, tarpon have been documented at lengths of more than eight feet and weighing 280 pounds. Catches weighing more than 200 pounds, while uncommon, do occur. Many fish caught are well over 100 pounds. Their growth rate is slow, taking 8 to 10 years to reach maturity, and generally those over 100 pounds are female. Tarpon can live 55 to 60 years. They are greenish or bluish on top, and silver on the sides. The large mouth is turned upwards and the lower jaw contains an elongated bony plate. The last ray of the dorsal fin is much longer than the others, reaching nearly to the tail.

They are found primarily in shallow coastal waters and estuaries, but they are also found in open marine waters, around coral reefs, and in some freshwater lakes and rivers. Their normal migratory pattern ranges from Virginia to central Brazil in the western Atlantic, along the coast of Africa in the eastern Atlantic, and all through the Gulf of Mexico and Caribbean Sea. Florida is widely regarded as having many of the best tarpon fishing locations in the world, especially the world-renowned Boca Grande Pass in Southwest Florida.

Fishing for the tarpon can at times be an exercise of patience and discipline. You may be surrounded by large schools of rolling tarpon containing hundreds of fish and they will not hit anything you throw at them. Other times, it is a feeding frenzy. So, go fishing for tarpon every chance you get, that next world record catch may be waiting just for you.