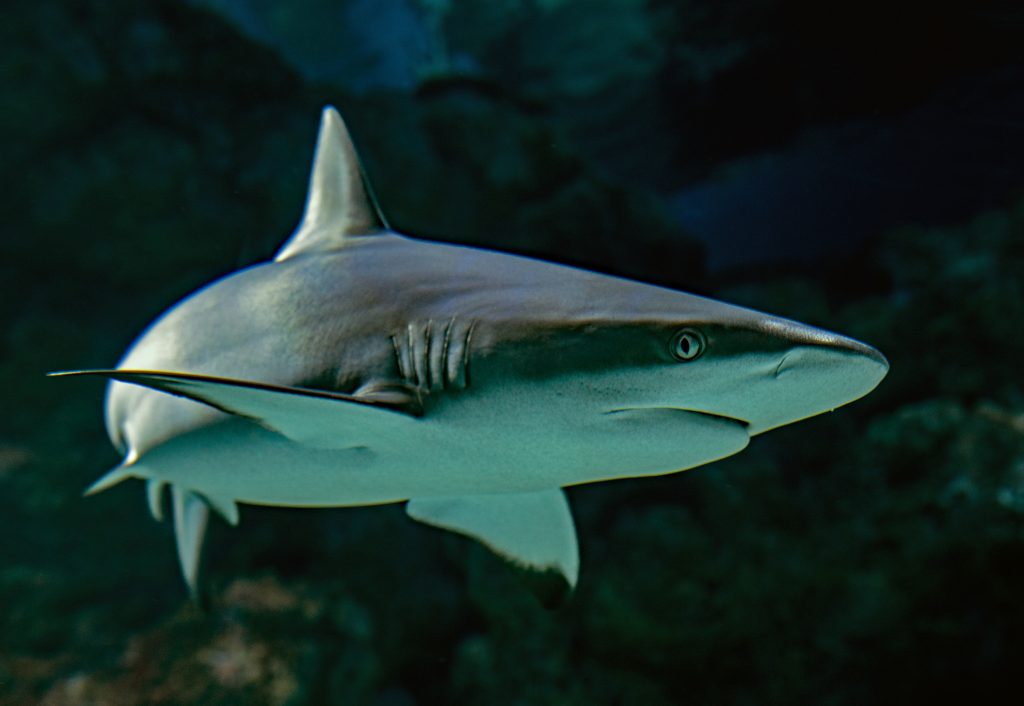 It seems logical that sharks and spear fishing don’t mix very well together. Something about the fact that a dead fish at the end of a spear or hanging from your belt that just may attract a shark that is looking for a meal.

Considering the shark’s senses are highly attuned to thrashing fish and dead fish for that matter makes the spear fisher a possible unintended target. Years ago when I used to spear fish a lot in Long Island Sound, NY we didn’t have the danger of a possible shark attack because back forty years ago there were only sand sharks to deal with.

Now with global warming I really don’t know what type of sharks migrate into Long Island Sound during the summer months. What we had to deal with were currents, fishing line and boats all of which could cause injury or death.

Since the sound was quite shallow for the most part a short spear gun was needed because of it’s maneuverability around the rocks where the black fish and stripped bass lurked. The spear gun was powered by three surgical rubber bands that propelled a steel shaft approximately twelve feet underwater.

It was a dangerous weapon that needed to be treated with respect. One of the problems was missing a fish and having your shaft hit a rock and bend which drastically affected future shots. I used a detachable tip because a large stripped bass will bend a shaft if it hits a bony area and the fish then struggles to get free.

Nowadays there are six foot spear guns for open water diving whereby a spear fisher free dives fifty or more feet and shoots ocean going fish. Truly the top of the sport in terms of athletic ability, endurance and guts. If you have ever dove into the nothingness of a deep ocean you will know what I mean. You look down and you not only can’t see the bottom but it all goes dark beyond a certain depth. It can be unnerving to say the least.

One point I would like to bring up is that spear fishing with scuba is for people that have no ability and like to shoot helpless fish that can’t escape. There is absolutely no skill involved and in many parts of the world this practice is outlawed.

Anyway, sharks are attracted to fish that have been speared and will attack a spear fisher if the opportunity presents itself. There are safeguards that you can take to help minimize the danger of such encounters.

One, As soon as you spear the fish return to shore or your boat and deposit the fish and then go back into the water. Do not drag the dead fish on a stringer hanging from your waist.

Two, If this is not possible then make sure you have a inner tube with a visible dive flag with you. The center of the inner tube is a great place to attach a heavy duty plastic bag so when you put the fish inside the bag the blood will no longer act as a lure for sharks.

Three, This seems quite obvious but if there are sharks in the area that have been sighted then it would make sense not to spear fish in that area!

Four, If you do encounter a shark of any size while you are spear fishing then do the smart thing and give the\ shark what he wants. He does not want you because you are not his preferred food source but if you don’t give him what he wants then you may become an accidental meal.

Five, It the unlikely event that you have disregarded all these prudent suggestions and find yourself face to face with a shark then use your spear gun as a prod to keep the shark at bay. Always face the shark as you retreat to shore or your boat and keep the spear in its face. Jabbing it’s nose or eyes may work but no guarantees. If you do get safely to your boat or shore then call it a day because you just dodged possible death.

It’s a great sport but as with anything that involves the ocean it has its inherent dangers that can be mitigated by using common sense. As a plug for a shark deterrent product using shark bio barrier on your fins, belt, inner tube may just help keep the sharks away!

Spear fishing is a dangerous sport if you are the in an area where sharks are, feed in or migrate to. Since spear fishing involves shooting fish which causes their deaths this will cause the shark’s to consider the fish as a food source and since the spear fisher is close to the fish then he or she may be attacked.