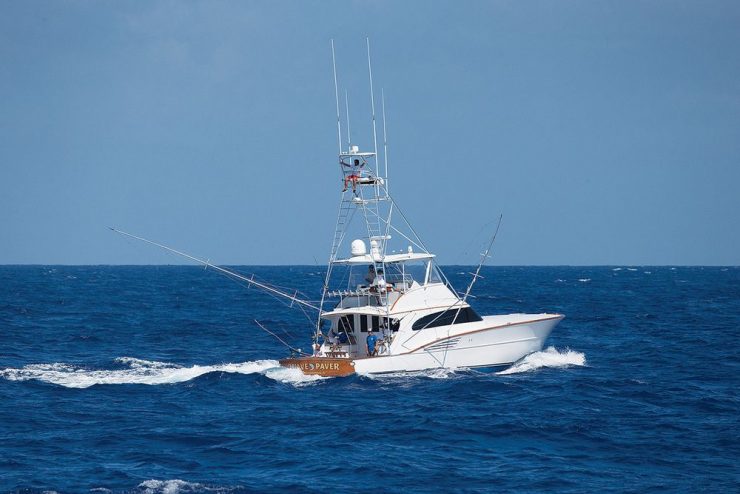 This is a question often posed by anglers new to trolling and even some veterans as well. You may have found yourself in the offshore section of your local tackle shop confused at all the different trolling lures available and wondering how the makers expect you to pull them. The truth is, there is no “best speed” to troll, it all depends on the situation and the baits you pull. I have broken down the different categories of speeds and what they are best for.

The first is 0-4 knots called bump trolling. This is not really as much of trolling as much as it is giving a live bait direction to swim. Live bait is a necessity for this style and this style of trolling is specifically for it. This can be used for with cigar minnows or menhaden for kings, live hard tails for yellowfin, or even with football tuna or skipjack for marlin.

Pro: No lure consistently out fishes live bait, so if you know exactly where the fish are this can be the best tactic.

Con: If you aren’t sure where the fish are staged, the slow speed hinders you from covering water. You may only cover a small amount of water by the end of the day.

The next would be 3-8 knots depending on conditions and rigs. This is the zone where trolling dead bait can be deadly. Generally offshore this is done with ballyhoo. Naked ballyhoo can be deadly,but most mix up their spread of ballyhoo with some with chugger heads, islanders, sea witches, or dusters. This is also a good speed for hard baits. Make sure you have a wahoo bait in the spread, which at this speed should be a billed diving lure such as a stretch 30. A planer can help as well when matched with a large spoon or islander with a strip bait.

Pro: This covers more water than live bait, and presents baits naturally without a ton of prop wash.

Now my personal favorite is lure speed of Hawaiian style lures such as Black Bart or other lures. This speed varies between usually 5-11 knots and most is done between 6-9 knots. It is possible to pull islander and ballyhoo combos the same speed sometimes but I would not recommend it. Typically these lures need more speed and it is better to simply choose a style instead of mixing. However, the inventions Nitta Fishing Innovations have made are changing the game at these speeds. Now you can troll ballyhoo and other dead baits this fast and them not wash out. As for the lures, the head action is the key to the bight. Get it right and its magic. If you do run a wahoo bait in this spread this is where a Marauder or a Yo-Zuri Bonito shines above a billed bait at higher speeds.

Pro: Covers water the best of techniques. It’s like pre-fishing a bass tournament, you cover water until you find the fish.

Con: Moving this fast it can be challenging to pick apart a productive area.

The last speed is high speed wahoo fishing. This is done between 10-22 knots normally. This is often rigged with a wire rigged wahoo weight followed by a 30 foot shock leader of at least 300 pound mono followed by a trolling lure built for speed. These lures are often cylindrical and hydro dynamic. One of the best are the new Black Bart Metal Heads. I also recommend the Yozuri Bonito behind a lighter wahoo weight. The best time to high speed is from the first light to when the sun comes up or the last hours of light in the evening. However, you can high speed between spots as well.

Pro: This speed covers a ton of water and excites the speedy wahoo.

Con: It burns a lot of gas.