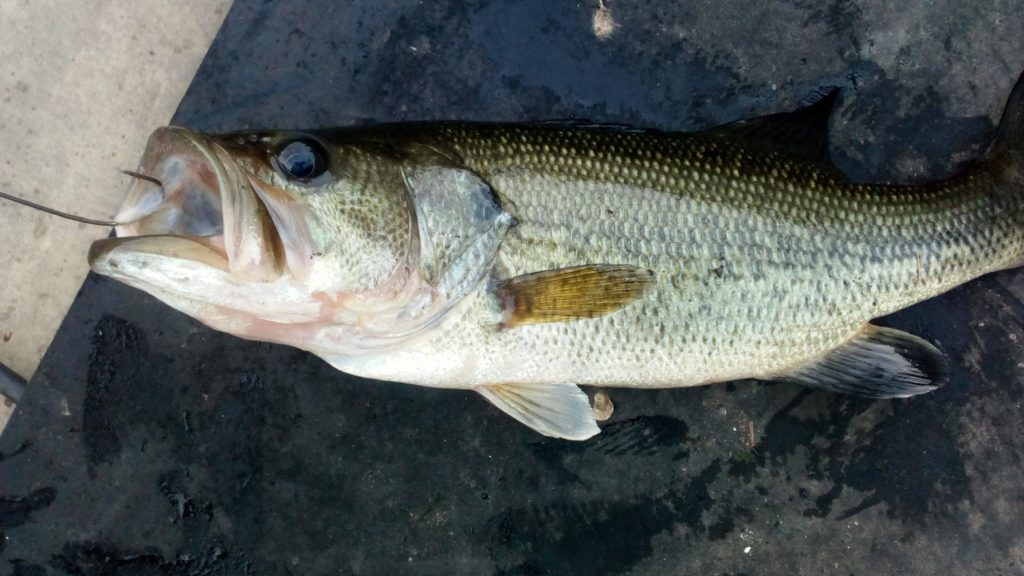 Largemouth bass season begins in mid-May here in Wisconsin. Depending on the weather year to year, many fish may be in pre-spawn, spawn or post-spawn modes. Last year, the bass were just ending the spawn period. This year, they were still in pre-spawn. Shifting weather patterns in the last couple years have really affected bass behavior.

Early on, the fish were staging in about 4-5 feet of water (the depth of this lakes out weed edge). I absolutely slayed them on a scented tube jig (using our Lucky 7 Gamefish Attractant) in pumpkin color worked slowly along the bottom at the weed edge. As the bass moved up to spawn, I kept throwing the same lure at them, catching good numbers of fish. After the majority of the fish spawned, many returned to the outer weed edge during the day, returning to feed in the shallows in the evening. AND I COULD NOT BUY A BITE!

I could see the fish chasing minnows, but the tube jig didn’t work.  did try changing colors, from pumpkin, to silver/grey to black and blue. What worked in the same places before the spawn was not working now. I wasted a couple hours fishing this set up before I finally decided to change. One bite in 2-3 hours was unacceptable.

I finally tied on a Senko-type worm, 5.5″ rigged weedless without any additional weight. Watermelon candy was my color of choice. On the first cast… BANG, a four pound fish grabbed the worm, did a couple of aerial maneuvers and was brought to the side of the boat for pictures and release. Nearly every cast thereafter resulted in another hit or bass in the boat. I was fishing in the same spot I was just skunked in a few minutes earlier. This goes to show you that you cannot count on the bass doing the same thing for any length of time. If you want to catch them, you need to be willing to change it up and rediscover what they want today.

I mentioned I was using Lucky 7 Gamefish Attractant – Baitfish Massacre. On days the fish are really biting, even without a scent, I still find it to be a great asset. I truly believe fish hold on longer to both scented and salted plastic baits, allowing you more time to effectively set the hook. It brings more fish in the boat for just that reason alone. If it is that Personal Best biting at that time, you surely want him to hold on and increase your chances of a good hook set. And on those slow days, a great quality scent will entice less active fish to bite. Using a scent is always a good idea. In fact, I know of no situations in which it is not an asset to your day on the lake. Trust Nelson Creek Outdoors for all your quality fishing and hunting scents.